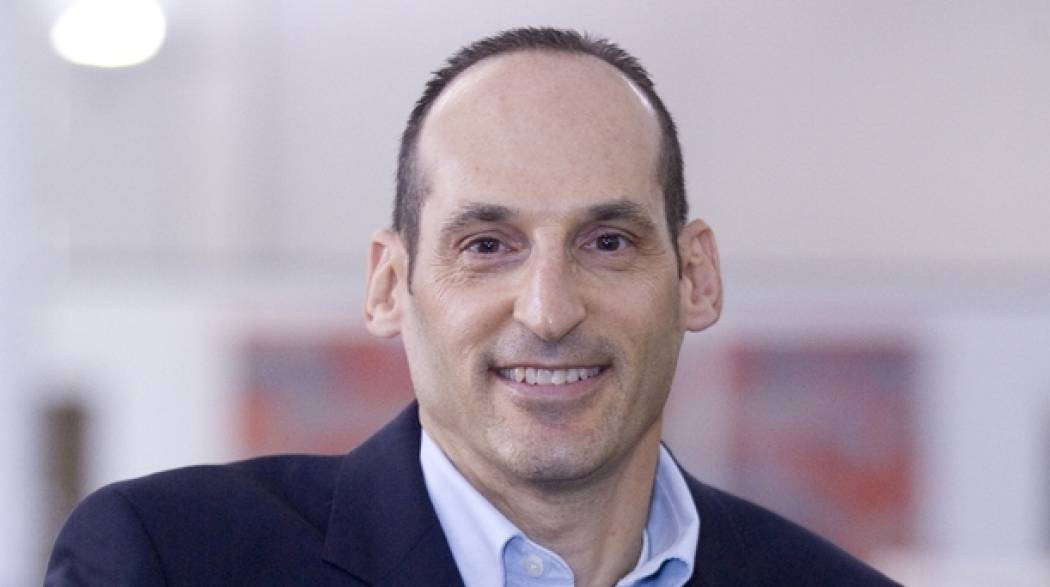 I recently had the pleasure of speaking with Steven J. Bell, the Associate University Librarian for Research and Instruction at Temple University, and current Vice President and President Elect of the Association of College and Research Libraries (ACRL). Steven received his Doctorate in Education from the University of Pennsylvania’s Graduate School of Education. Steven’s most recent book, coauthored with John Shank, Academic Librarianship by Design: A Blended Librarian’s Guide to the Tools and Techniques lays out a new vision for designing the future of academic libraries enabling librarians to become indispensable partners in the college teaching endeavor by integrating themselves into the instructional process.

“What can we do as academic librarians to better prepare ourselves for what is certainly an uncertain future? We just have to think more entrepreneurially and look for these opportunities.”

I first met Steven a few years ago when I contacted him after reading his excellent Inside Higher Ed article on design thinking and higher education leadership. Steven is a thoughtful leader who constantly experiments with new ways to improve Temple’s Libraries and the profession of academic librarianship. Our conversation focused on the future and emerging roles of academic libraries, specifically: Blended Librarians, collections, user experience, Massive Open Online Courses, the ARL 2030 Scenarios Report, and change leadership. Below I’ve summarized some of the projects and articles Steven mentioned during our interview.

Steven thinks new learning initiatives like MITx and Udacity’s massive open online courses are an opportunity for academic libraries to serve non-traditional, potentially unaffiliated students, who he refers to as higher education’s new majority learners. In a recent article from his From the Bell Tower Library Journal column he suggested two possible scenarios for academic libraries within this emerging unbundled higher education landscape.

Scenario 1: “It seems likely that the providers of unbundled degrees, whether primarily OER like MITx or profit-driven like StraighterLine, would have little need for physical libraries. For one thing, no library means significant cost saving which helps keep tuition low or non-existent. These organizations have no research agendas nor do they seek grants, so there would be no faculty needing huge book and journal collections. Just as the case is now with some online higher education providers, library services, if available, are marginal. They can always purchase access to a set of resources that would adequately qualify for whatever passes as accreditation. They might even go to the trouble to pay a librarian to look after all of it for them.”

Scenario 2: “Another scenario might involve unbundled academic libraries that would offer different types of resources and services. A student might connect with one library for help with a question on ancient Rome, but contact another depending on the subject matter or the service needed. This might involve some extended version of resource sharing where academic libraries would serve more than their own local community. We do that now, but think of it on a much larger scale and for much more than just content sharing. Who pays for it? Perhaps the students, who might pay a fee to access the services and content on a per-use basis, or they might get “library credits” from the institution providing their unbundled course that could be used to obtain service at a participating library. An unbundled system of higher education might require academic librarians to think more entrepreneurially about how they operate.”

Some in the press have suggested these initiatives will topple the ivory tower, knock down campus walls, crumble higher education’s monopoly, and start an Arab Spring of free online learning.

Steven has a more nuanced prediction:

Am I painting a scenario in which traditional higher education and their academic libraries have no future? If it reads that way that’s certainly not the intent. I believe many traditional colleges and universities will continue to thrive and provide the type of experience that many students still want, although the number of families who can afford the tuition is likely to decline. Just anticipate fewer traditional institutions, and fewer academic libraries supporting them.

Rising costs are a major factor forcing change in academic libraries. Steven is working to address these issues directly through a new textbook project at Temple University.

College students are spending on average $1,100 a year on books and supplies. Temple’s new Alt-Textbook Project is trying to change that. The initiative provides faculty members with a $1,000 grant to create new original digital learning materials with the goal of creating free, timely, high-quality resources for students. Steven recently spoke to Temple’s student radio WHIP about the project. Steven discusses the Alt-Textbook project as part of a larger Alt-Higher Education movement.

Steven, with his colleague John D. Shank, developed the concept of the Blended Librarian, a new form of academic librarianship that integrates instructional design and technology skills into the traditional librarian skill set. The goal is to better serve faculty and students through deeper engagement in teaching and learning. 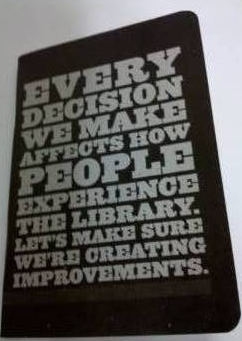 Steven’s recent work has focused on improving the user experience at the Temple University Libraries through researching the needs of students, and by gathering ideas from Library staff. Using the Study of Great Retail Shopping Experiences in North America Steven surveyed students on their expectations to “gain insight into what would comprise a “WOW” experience for student members of the academic library’s user community, and better understand in what ways and which areas academic librarians are succeeding or failing to provide the WOW experience”. In 2011, Steven presented his findings at ACRL’s national conference in this recorded presentation, “Delivering a WOW User Experience: Do Academic Libraries Measure Up?”.

Steven also launched a staff initiative called Capture an Idea and gave every staff member a notebook to carry with them suggesting they record community member’s user behavior, things that are broken, complaints and compliments, and general ideas about the library. The notebook’s cover read “Every decision we make affects how people experience the library. Let’s make sure we’re creating improvements”. After several months of collecting ideas the staff discussed them at a retreat and implemented a few their suggestions including a Fix-It Team to address broken things quickly.

In a previous post I discussed ARL’s 2030 Scenarios Project and ACRL’s “Futures Thinking for Academic Librarians: Higher Education in 2025″ report. Drawing on those projects, and my conversation with Steven Bell, I created this chart to summarize my current thoughts on the historical, emerging, and future roles of academic libraries across several topics. I’d appreciate your feedback in the comments section below. 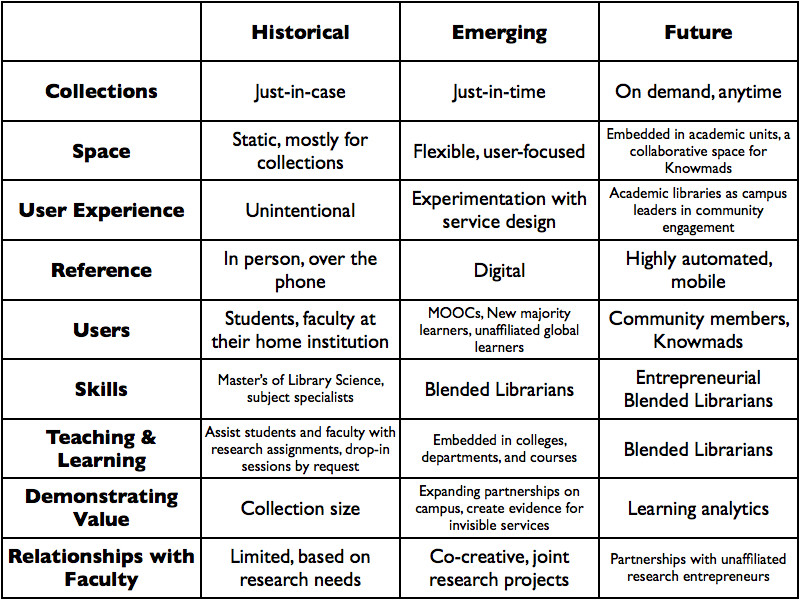 For more information on Steven’s work please see his From the Bell Tower column, Designing Better Libraries blog, and Learning Times Blended Librarian Community. You can also find him on Twitter.

From the book "Knowmad Society"